The Secrets of Shopping in
French Supermarkets in Alsace 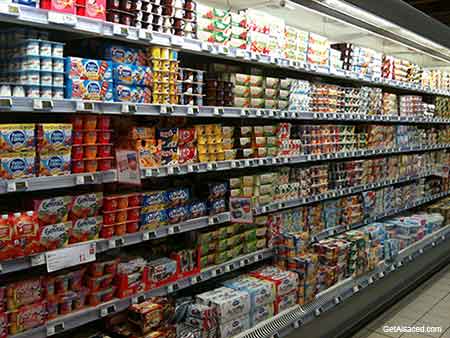 One of the most overlooked tourist attractions in Alsace (and the rest of France) are French supermarkets...

I have lived here for a looong time and the differences still amaze me. Sure...you can find the basic items like milk, butter, juice, etc, but there are a lot of things you won't find...

And more importantly there are things you aren't looking for that...maybe you should try out!

First off, there are a few different sizes of French supermarkets in Alsace...

If you're in a village or in the center of a bigger city, they will be small, but surprisingly they will have almost everything the big ones have where food is concerned except for maybe for the butcher counter or fish counter.

Fresh produce, frozen foods, canned and boxed foods, etc.. What is nice about these stores is that you can usually walk to them. They often don't have any parking so all the better.

You'll find French supermarkets like these just outside of medium sized and bigger cities or in shopping zones.

You might be lucky enough to be close enough to walk to one, but more than likely you'll have to drive or take a bus.

These stores have a selection of pretty much everything you need to live in France. Clothing, kitchen stuff, household repair, things for your car, a butcher counter, a fish counter sometimes, prepared foods, etc. They may even have books and toys. 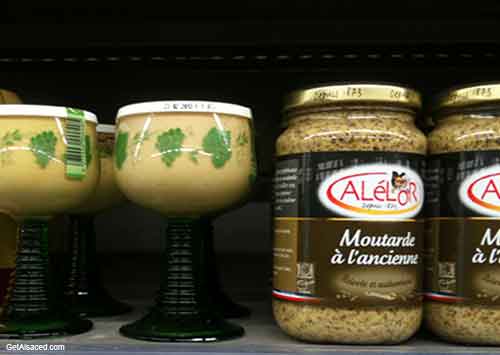 You won't find too many of this size of French grocery store. You'll only find them outside of larger cities in shopping zones.

If they don't have it, it will not be easy to find elsewhere. Clothing, books, magazines, electronics, appliances, kitchen stuff, household stuff, some furniture plus a bigger fresh produce section, frozen foods, prepared foods, a butcher and fish counter, prepared foods, etc...

You will need a car or a lot of patience sorting out how to get there by bus.

Opening Hours of Supermarkets in Alsace

Alsace is a bit different than other regions of France as most French people will tell you. Almost all stores open around 8:30am and close around 7 or 8pm. All of them are closed on Sundays.

Smaller grocery stores close around 12pm and reopen at 2pm. This is also true for most smaller stores.

One of the reasons is that many schools (especially elementary schools) don't have a cafeteria so the children come home to eat. Small grocery stores are usually run by the owners, so they close up to go home and feed their children.

Generally the rule is: the smaller the store, the more restricted the opening hours.

Bigger stores are open during lunch usually but they will usually close at 7pm.

On Sundays if you are desperate, you will sometimes find tiny ethnic grocery stores that are usually open. In touristy areas you sometimes find little supermarkets open. Your best bet is to go in the morning.

In Alsace and the rest of France as well, you have to bring your own grocery bags or buy one at the store.

Personally I always keep a few of them in the car. Sometimes they are really cute and could make an interesting souvenir...

You are also expected to bag your own groceries...

You won't find much of a difference in the different supermarket chains in France. They all have basically the same things and their prices are about the same.

The supermarket chains listed have all sizes of stores.

There are discount supermarkets in Alsace but they tend to be small and they don't quite carry everything although they usually have most everything food wise. 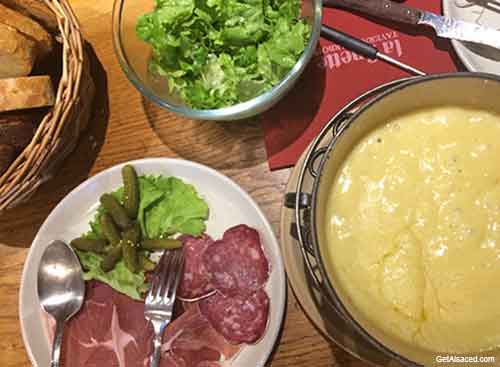 What Can You Find in a
French Supermarket in Alsace?

So now that I've peaked your interest, what have you discovered in a French grocery store or food shop in Alsace?

Other Food Discoveries in Alsace...

Click below to see what you can find in a French supermarket in Alsace...

When you come to Alsace, there is one dish that will be hard to avoid... It's knepfle (pronounced kuh nep flee). Alsace's version of handmade pasta! …

Tarte Flambée Flammakuecha and Alsatian Pizza Not rated yet
I know a lot of you have probably heard of Alsatian pizza because of Trader Joes (in the US)... I can't comment on the Trader Joes version because I've …

Escargots in the French Supermarkets in Alsace Not rated yet
I know...I know...some of you are thinking I must be crazy to think that you would even consider eating escargots also know as snails... And when I …

Plums in French Supermarkets in Alsace Not rated yet
If you like plums (and most other fruits for that matter), you will be in heaven here in Alsace during the summer. Alsace has a climate similar to the …

Munster Cheese: Regional French Cheeses in Alsace Not rated yet
If you're coming to Alsace, you may want to try Munster cheese... It's the regional cheese specialty in Alsace! You'll find it in cheese shops, restaurants …

The Cheese Section of a French Supermarket in Alsace Not rated yet
Cheese...it's one of the many things France is famous for... And you'll find it in abundance in Alsace! Here's a photo of just half of the cheese …

Choucroute: Alsatian Sauerkraut Not rated yet
Choucroute is the Alsatian version of sauerkraut but it is not sauerkraut... Alsace may be a region with a Germanic culture, but they have their own …

Alsatian Country Style Bacon in French Supermarkets Not rated yet
I love bacon... I don't eat it all the time but I absolutely love it and you are going to love the Alsatian version of it! First things first... …

North African Merguez Sausage in French Supermarkets in Alsace Not rated yet
Here's something you probably wouldn't have thought of when visiting France...and particularly Alsace... It's a somewhat spicy sausage made of lamb …

The Yogurt Section of a French Grocery Store in Alsace Not rated yet
If you love yogurt, you will be in heaven here in Alsace... I think you could try a new one every day and not repeat for at least 6 months if not longer. …