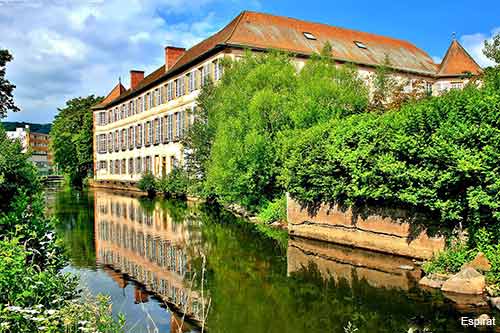 It's rare for a wine road village in Alsace to be more famous for its beer than its wine...

But that is the case in Mutzig.

Unfortunately its brewery has been moved to Schiligheim (about 18 miles/30 km away), but they still have a beer festival (usually the first weekend in September).

But there's still wine...plenty of wine every day!

And if you like military history, you might want to check out the Kaiser Wilhelm II fort just outside of the village (begun in 1893).

Hopefully you'll find everything that you need to know about Mutzig and Alsace...

If you're staying in Mutzig, there's more to do than sit around and drink beer...

You'll be very close to quite a few World War One and World War Two sites not to mention you're literally within walking distance of Molsheim (half an hour).

There isn't a train station but Molsheim does and it's only 2 miles/3 km away.

Distances given are the distances from the center of the village.

Looking for a Hotel in Mutzig?

The Hotel Ours de Mutzig is a cute little hotel in an old historic building right next to the City Hall. Some rooms are decorated in an Alsatian style and some in a more modern style. They have an outdoor pool and play area for children. Breakfast, parking and WiFi are available. The hotel also has a restaurant.