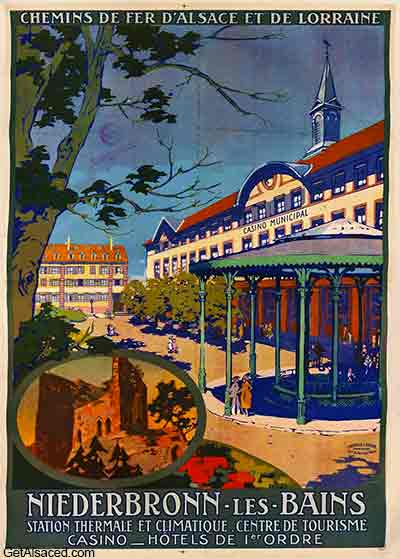 Niederbronn les Bains is a bit different than the other villages in Alsace...

First of all it's the location of a natural spring that has been used since Roman times, so if you'd like to try out a French natural springs spa, this is your chance...

It is also right in the middle of Le Parc Naturel Regional des Vosges du Nord which means there are a lot of castles for you to drive or hike to, so if nature, scenic mountain views and short hikes to medieval castles appeals to you...then this village might be at the top of your list.

And if you've ever wondered what a French casino looks like, you'll get the chance here because they have one in town...

Oh and I forgot to mention that it is a really beautiful village WITH a train station for those of you who don't want to rent a car.

Hopefully you'll find everything that you need to know about Niederbronn les Bains France... 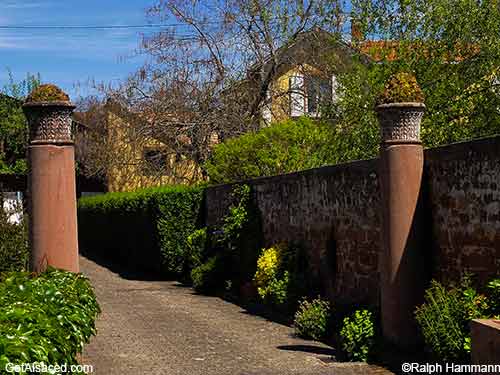 Niederbronn les Bains is a great location to base yourself if you want to tour northern Alsace because it's not very far away from anything in the area, not to mention it has a good choice of hotels and restaurants.

Distances given are the approximate distances from the center of Niederbronn les Bains.

The Hotel Mercure  is a simple three star hotel that will give you a place to sleep in the center of town (next to the casino in fact). The rooms are a little small, but clean. Breakfast and parking available.

The Hotel du Parc in Niederbronn les Bains is actually the former Hotel Cully now under new management. It's a charming family owned hotel right next to a Park and a little creek about a 10 minute walk to the center of town. Charming and old fashioned rooms with free WiFi. Breakfast and parking available.

If you're looking to save some money, the Hotel Majestic might be a good choice. It's a simple two star hotel offering a nice clean room for a low price. Free WiFi and parking.

The Hotel Muller is actually a hotel and a spa. The spa and fitness center are included in the cost of the room so you have full access to everything when you stay at the hotel. You can also pay an entrance fee if you prefer to stay at another hotel. The rooms are tastefully decorated, the restaurant is great and the hotel is next to a park only a 10 minute walk from the center of town.