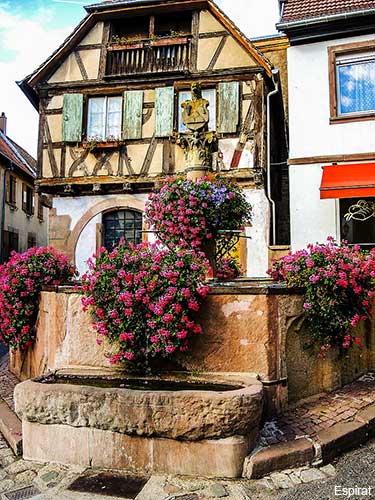 In addition to being a beautiful little Alsatian village, it is also famous for its Klevener de Heiligenstein.

It's one of the grape varieties in Alsace that you can only find in the area around the village.

Legend says that it was first introduced into Alsace over 400 years ago and the village was authorized to plant it by the Bishop of Strasbourg (who owned the village at the time).

In fact the Bishop of Strasbourg had a preference for being paid in Klevener (for taxes) by the wine makers here.

And you won't find Klevener anywhere else in Alsace...

If you're looking for a chance to learn more about wine making, Heiligenstein is a good choice because the Meckert family runs their hotel just as well as they run their winery...

And when you're not tasting some fantastic wine, you can easily bike from village to village because there are quite a few wine villages that are only a few miles away from Heiligenstein.

Distances given are the approximate distances from the center of Heiligenstein.

Mont Saint Odile is a 7th century convent about a 20 minutes drive from Obernai up in the Vosges mountains with some fantastic views of Alsace. This mountain is very popular. First the Celts were here, then the Romans, and then between 680 and 690, Saint Odile founded her convent. There are some lovely short hikes where you can see intact remains from the Celts and Romans as well as a hotel and restaurant at the convent. The convent itself has been enlarged over the years and renovated many times since being built in the late 600s.

Where to Stay in Heiligenstein

For those of you looking to stay at a hotel owned by a wine maker in Alsace, this hotel is for you! The Meckert family has been making wine in this village for generations and they also run this hotel. Most rooms have a view of the vineyards and you'll be in an adorable little village in Alsace. Surrounded by vineyards and gardens. Outdoor play area for children and a terrace with lounge chairs for adults.