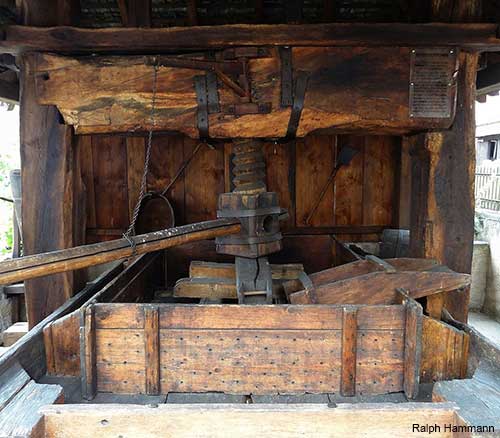 Mittelbergheim (just like Riquewihr) is considered to be one of the most beautiful villages in France...

But you won't find busloads of tourists in this wine road village (at least not until they find out about it). So until they do, you can enjoy this beautiful Alsatian village in peace and quiet.

And if you love Sylvaner wine, it is the only village in Alsace that is allowed to grow it in its Zotzenberg Grand Cru vineyards (usually reserved for Riesling, Gewurztraminer and Pinot Gris).

What does that mean? It means that this area in Alsace makes some very good Sylvaner wine!

You'll have all the peace and quiet you want staying in Mittelbergheim...

And at the same time you'll be a short drive away from bigger villages and cities when you want to get away from all that peace and quiet.

For hikers and bikers there a number of villages listed below (and even more that I didn't have room for) that are less than 5 miles away.

Distances given are the approximate distances from the center of Mittelbergheim.

Mont Saint Odile is a 7th century convent about a 20 minutes drive from Obernai up in the Vosges mountains with some fantastic views of Alsace. This mountain is very popular. First the Celts were here, then the Romans, and then between 680 and 690, Saint Odile founded her convent. There are some lovely short hikes where you can see intact remains from the Celts and Romans as well as a hotel and restaurant at the convent. The convent itself has been enlarged over the years and renovated many times since being built in the late 600s.

Looking for a Hotel in Mittelbergheim?

If you want to spend more than a day wandering around Mittelbergheim, you might want to try out Hotel Gilg. Like most of the village, it's in a beautiful old building built in 1614. Room decor ranges from standard to very romantic and old fashioned. And there's a fantastic Winstub serving Alsatian and French food.