Places to Visit in Basel 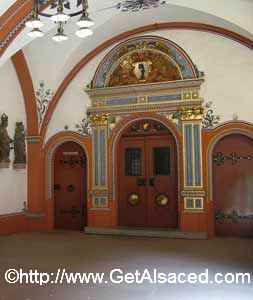 First, look on the Basel city map for the SBB.

The SBB is the main train station in Basel and where you will most likely enter Basel.

In front of the SBB, you'll find almost every tram and bus that circulates in Basel.

But before you leave the train station, go to the tourist office first and get some maps, books, and other information.

The tourist office is down the hallway where all the little sandwich and pizza stands are.

Just keep going until you see the sign for the tourist office. I believe it's next to a wine and liquor shop.

After the tourist office, you can go outside to the tram and bus station area.

If you want to go directly to the Marktplatz or City Hall square, there are quite a few trams that will take you there.

Probably the easiest to spot is the number 11 tram going to St Louis Grenze (French border).

Most of the trams are green...like the number 8 tram going to Kleinhüningen.

How to Buy Tram Tickets in Basel

You'll see these little green machines next to all the tram stations.

Nowadays you can choose which language you want when buying tram tickets.

First of all, if you just want to go somewhere in Basel, push "1 Zone".

It will tell you how many Swiss francs you need for 1 person. 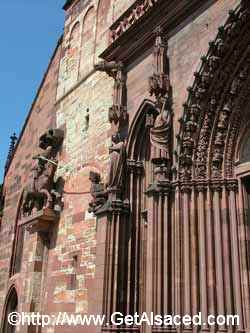 After you pay, it will give you a little ticket.

The ticket is good for as many transfers as you want going away from the tram stop where you bought the ticket as long as you are don't leave the city of Basel.

I might also add that there is a time limit...I think it's about one hour. That's plenty of time.

There's no one that will check your ticket on the tram but...

There are tram police that board trams and check everyone's tickets occasionally.

If you're in Basel just for the day, you can buy a tram ticket for the whole day or...

You can buy a multi ticket for multiple separate trips too or...

Tickets for going into France or Germany...just about anything that involves the trams, you could buy on these machines.

You can explore your options on the machine....

If you will be staying at a hotel or hostel in Basel, you will get a "mobility pass" once you check in...

This pass allows you to travel on Basel's public transportation for free.

If you don't want to buy multi tickets with the machine, you can go to any "Kiosk" and ask for the tram tickets. Tram is the same word in German so they'll figure out what you want and give you a  card that allows you to ride the tram 6 times.

It's great if you have a group of people and you are only planning to take one trip on the trams.

It will save you having to find enough coins to pay for everyone if you have a big group...

And you get 6 one way trips for the price of 5.

But if you're planning on making more than 1 trip on the tram, I suggest you consider the day ticket because 2 or 3 rides on the tram will normally be the same price as a day ticket.

And with a day ticket, you can jump on any tram and ride it from one end to the other as many times as you want.

You can see a lot of interesting things in Basel that way...


Places to Visit in Basel on the Basel City Map

There are so many places to visit in Basel.

This is a list of my favorites organized in a way so you can make your own little tour of Basel.

Everything on this Basel city map are all within walking distance, but I'd put on my really comfortable walking shoes first...

First stop on the Basel city map, there's the SBB (also known as the main train station in Basel) which is probably your starting point. From here you can take the number 11 or number 8 tram to Marktplatz.

Once you are at Marktplatz, you won't need to take the tram unless you just want to...

When you get off the tram, next stop on the Basel city map is the City Hall...

It's the big red building with golden spires... 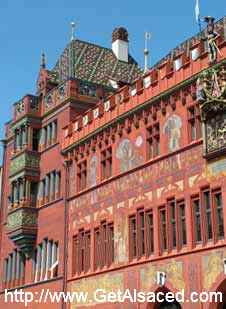 The courtyard is open during the day and you're free to walk around and explore it. Look for a door in the back that leads up some stairs...

If this door isn't locked, you will discover the tiny medieval lanes of Basel leading up to the Munsterkirche.

The Market at Marktplatz

Most every week day, there will be a food market at Marktplatz.

You can buy cheeses, flowers, sausages, meats, breads, and a little something to munch on here.

It starts closing up in the early afternoon...

If you walk from Marktplatz towards the Globus department store, you'll see a bridge.

This is the Mittlere Bruck.

It had to be rebuilt in 1905, but it is identical to the original medieval bridge.

The Way to the Munsterkirche and Medieval Winding Lanes

If the door in the back of the Basel city hall is locked, you can still get to those winding little medieval streets... 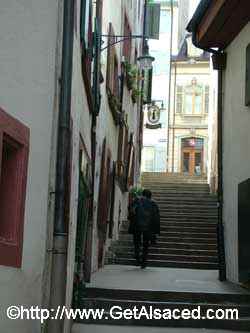 When you come out of the city hall, go to your right. You'll see a little stairway leading up a narrow street.

This will take you to Munsterkirche, but you'll still need a copy of this Basel city map because it's not a direct route.

But generally speaking, once you get to the top of the stairs, continue to your right...

And enjoy the wonderful medieval homes and buildings along the way!

The Munsterkirche is the oldest church in Basel. It was built between 1000 AD and 1500 AD.

The original Munster kirche was damaged around 1356 by an earthquake and had to be repaired.

In the crypt, there are graves dating back to 1000 AD.

Sometimes the crypt is open and sometimes it isn't, but the rest of the Munster kirche is open during the day.

And you can climb to the top of its roof for a few Swiss francs...

Behind the Munster kirche you'll see a set of stairs leading down to the Rhine...

It's one of four Faehri crossings in Basel.

The Faehri are boats that cross the Rhine river without an engine only using the current of the river to get from one side to the other. 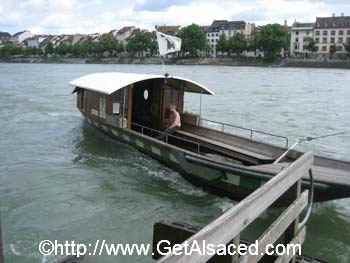 In the past, the Mitterle bruck was the only way to cross the Rhine in Basel for a long time.

Nowadays, no one really needs these ferries, but the people of Basel still support them and allow them to continue operating.

And after you ride the ferry, you can walk back up the Rhine to Mittlere Bruck...

As you can see on the Basel city map, it's not a long walk...

Barfüsserplatz is a short walk from Marktplatz as you can see on the Basel city map...

There are a number of interesting places to visit here.

First off is the Barfüsser Kirche which has been turned into the Basel Historical Museum.

Next, sometimes there is a market selling clothing, jewelry and food which can be fun and interesting.

Then there is the "Fastnachts Brunnen" which you can see when you go around the corner of the "Casino". It is a moving sculpture built by Jean Tinguely one of Basel's most famous sculptors.

Words can't clearly describe this piece of art or any of Tinguely's work...

You'll just have to go see if for yourself!

And if you're interested, there is Papa Joe's. It's an American themed restaurant. Have you ever wondered how other cultures define American culture?

If you're from the US, it's a very interesting experience...

And if you missed the tourist office at the SBB, there is another one in the Casino.

To get to the Spalentor, you may want to take the tram... 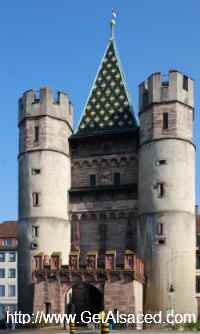 As you can see on the Basel city map, it's not a long walk, but just in case, you can take the number 3 tram going to Burgfelden Grenze at Barfüsserplatz.

This is the biggest medieval city gate I have ever seen. We're not talking about a village city gate. At the time, Basel had 20,000 residents. For the 1400s, that's a lot of people.

The Spalentor was built after the earthquake in 1356 practically destroyed the the former city gates and walls.

The medieval city walls were destroyed in the late 1800s...

But there are still 3 city gates (and some parts of the city walls) still standing...

And Spalentor is by far the largest and most impressive of them all.