Looking for a Hotel
in Scherwiller? 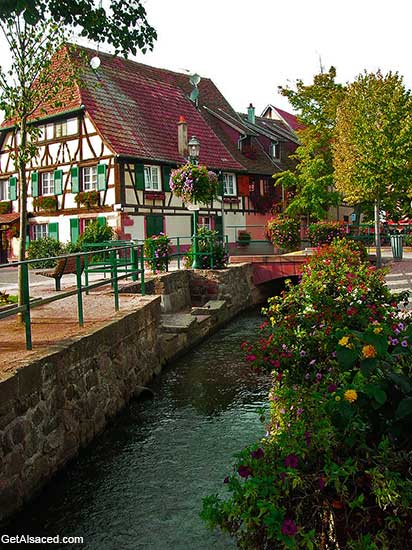 Scherwiller is an interesting little village on the wine road in Alsace...especially if you like Riesling.

For history buffs, it started out as a crossroads and a stop on a Roman road for salt merchants going to the Rhine river, although people were living around the village even before the Romans.

If you look carefully, you'll even find a few Roman road markers...

This is a particularly beautiful little village with a small river running through it and many opportunities to go for walks in the vineyards.

Or if you prefer a slightly more vigorous hike up to the two castles, the Ramstein and the Ortenbourg, it's only around 45 minutes one way. 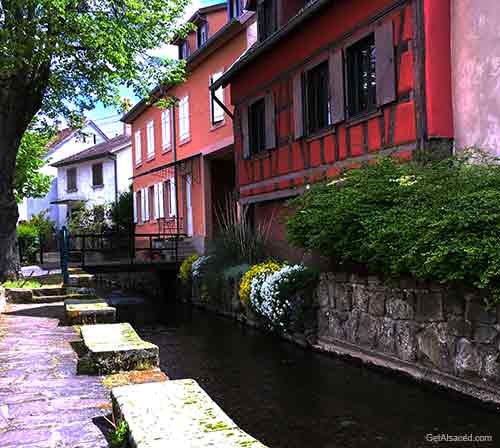 Scherwiller might be a good base for you if you're looking to avoid crowds of tourists without being far away from some very popular Alsace attractions.

There's a train station so that makes for a very convenient location for anyone who doesn't want to rent a car of course.

And you'll be only one stop away from the Selestat train station where you can catch the shuttle bus to Haut Koenigsbourg, Monkey Mountain and the Birds of Prey show.

Distances given are the approximate distances from the center of the village.

Bergheim is a quiet little village on the Alsatian Wine Road just past Ribeauville. One of the most amazing things about Bergheim is how it was managed to preserve almost ALL of its medieval city walls. You can walk around the village and see them for yourself before or after trying some of the local wine and food.