Looking for a Hotel
in Schirmeck? 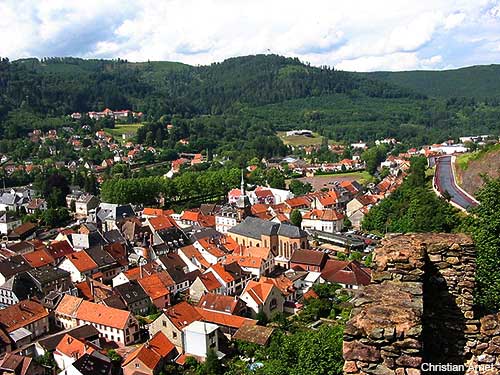 A hotel in Schirmeck may be a good choice if you're interested in World War Two history...

Schirmeck is a small village in the Vosges mountains (in the valley of the Bruche river) where you can learn quite a lot about Alsace during World War Two.

And even better, you can get there by train!

It doesn't matter if you're more interested in seeing the location of the Nazi "Reeducation" camp, the museum all about life in Alsace from 1870 to 1945 or the only concentration camp in France. They are all accessible by car or train.

And Schirmeck is a great place to do some hiking, biking or even horseback riding in the Vosges...

Or if you prefer to come in the winter, you'll be very close to a number of different mountains for skiing and sledding staying in a hotel in Schirmeck.

Hopefully you'll find everything that you need to know about Schirmeck and Alsace...

Alsace Daytrips from Your Hotel in Schirmeck

If you stay at a hotel in Schirmeck, you'll have a lot of attractions to choose from...

The Struthof concentration camp is about an hour walk (less than 3 miles/ 4.5 km) from Rothau (which has a train station) where you can take the same walk that the prisoners took many years ago...

And you'll be surrounded by the beautiful Vosges mountains staying at a hotel in Schirmeck far away from the tourists.

But still a short car or train ride away from the wine, the vineyards and some beautiful villages in Alsace!

Distances given are the approximate distances from the center of Schirmeck.

The Natzweiler Struthof concentration camp was the ONLY one of its kind in Alsace or France (technically part of Germany during World War Two). The Struthof is pretty impressive with plenty of information in English. You'll need around 3 hours for the visit.

In 3000 BC there were people living near Le Donon. It was the location of Celtic worship of their forest god Vosegus. Later the Romans used it to worship Mercury. There are two pathways that you can take to Le Donon and back in about 2.5 hours.

Mutzig is a small wine producing village in Alsace near Molsheim that is probably more famous for its beer than wine (although it has some excellent wine as well). And for those of you who love military history, there is Fort Mutzig built in the very late 1800s by the German Empire. If World War One history appeals to you, this might be a good stop for you.

Looking for a Hotel in Schirmeck?

The Hotel Residence La Rubanerie is a small, family owned, old fashioned hotel with both hotel rooms and a few studios (with kitchenettes) for families, but it's not a hotel in Schirmeck. The hotel itself is located just a bit outside of Rothau (very near Schirmeck). The building itself (built in 1850) is a former textile factory.

Hotel Neuhauser is much more than a hotel. It's a hotel with a French restaurant, individual chalets, a covered, heated swimming pool, a sauna and a fruit brandy distillery. But it's also not a hotel in Schirmeck because it's just outside of Schirmeck (4 miles/7 km). Beautifully decorated rooms and great breakfast.