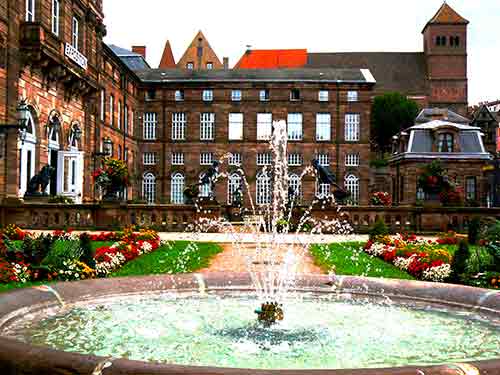 So you're looking for Saverne hotels?

You'll find a nice range of hotels and other accommodation choices here as well as ideas for nearby Alsace day trips.

This small town is also prominently featured in my guide book about Strasbourg and the northernmost (and lesser known) areas of Alsace.

Saverne may have started out as a stop on a Roman road, but it's grown a bit since then...

If you enjoy a little nature and hiking with your castles, wine and Alsatian cooking, then you'll love Saverne.

And here's another town you can visit by train or canal barge...

Hopefully you'll find everything that you need to know about Saverne hotels and Alsace here... 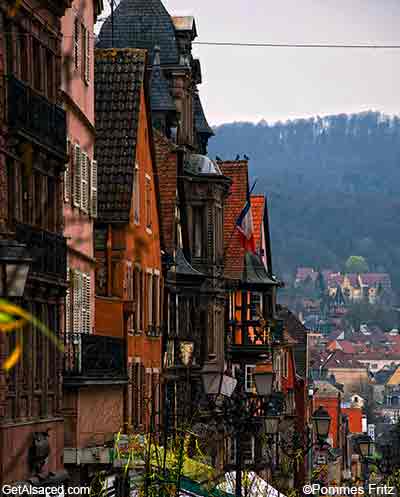 Saverne is on the Rhine-Marne canal near one of the few mountain passes in the Vosges, so it's easy to get to by canal barge. But it's also easy to reach by train!

If you're looking for a more quiet and off the beaten path Alsace vacation, Saverne could be a good base for you.

All distances given are the approximate distance from the center of Saverne France.

Other than being just another adorable village in Alsace, you can find the oldest (and still standing) basilica in Alsace in Marmoutier. It was originally built in the 600s. Of course it's been repaired and enlarged over the centuries, but it's still a rare find. You can tour its cellars by reservation.

Saint Louis Arzviller is the location of what could be described as a "boat lift" or "boat escalator". It's the only one of its kind in Europe. It's great for kids and there is a summer luge run nearby that your family will love!

La Petite Pierre also known as Luetzelstein is a small village in the northern Vosges mountains in Alsace with a 12th century castle and a lot of interesting and unusual things to see and do... If you enjoy a light relaxing hike of an hour or more, this village is exactly what you're looking for.

Just in case you didn't already know...Strasbourg is the capital of Alsace. It has a gothic cathedral that you can climb to the top of (if you think you've got what it takes), 16th and 17th century historic neighborhoods, at least 12 museums, shopping, and everything else.

The Hotel Europe is a lovely three star hotel located near the canal and the center of Saverne. Choice of different hotel room styles to suit your tastes. Air conditioning and breakfast. A slightly more luxurious option of the Saverne hotels.

The Hotel National in Saverne is a simple little discount hotel conveniently located near everything interesting in Saverne. Some rooms with balconies have nice views of the surrounding countryside. For what you pay, it's a good choice if you're looking for discount Saverne hotels.