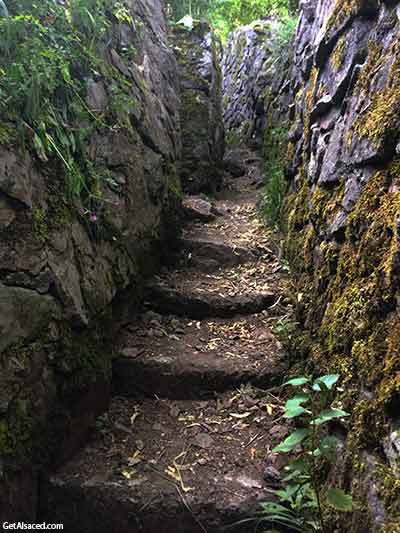 The French had only one objective on the subject of Alsace France in World War One.

Get Alsace and Lorraine back!

France had lost Alsace and Lorraine only 43 years ago in the Franco-Prussian War where the soon to be German state had given the French a lot of reasons to want revenge.

So France was looking for any good reason to do something about it.

Of course, France had taken Alsace from the Holy Roman Empire in the late 1600s. Basically Alsace went back and forth between France and what would eventually become Germany a lot.

So when World War One broke out, they set everything up to make big pushes to the east to take back what had been taken from them not that long ago.

Back and forth they went.

At Hartmannswillerkopf for example, one day they would advance, then within the next few days the Germans would recover their position for the most part.

Ultimately no one ever made any significant progress and especially not enough to justify the thousands of men on both sides who died over a couple of yards or meters in most cases.

Until they finally started focusing more on the northern battlefields outside of Alsace.

The Story of World War One in Alsace

Want to learn more about Alsace during WW1? How about a private tour of the World War One battlefields and trenches with me Suzele : )

Find out more about World War One and Two Tours Here

From about 1916 on, the battle lines in Alsace were relatively quiet.

And by quiet I mean that they stopped sacrificing hundreds of men to win more territory by charging the enemy.

But they didn't stop shelling and bombing each other.

It was far from quiet or easy living in Alsace France in World War One for anyone. Soldiers or civilians.

And far from safe.

But along the battle lines in Alsace, they lived in their intricate network of trenches for the next two years without significant casualties.

And left behind World War One trenches and tunnels built from concrete, stone, and even carved out of the mountain.