World War One Memorials in Alsace 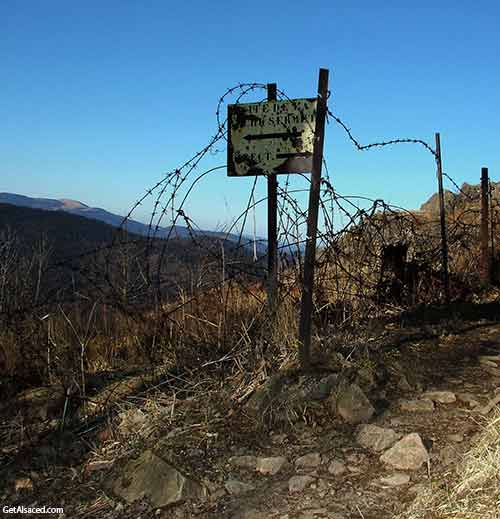 So this site is not for the faint of heart or better put the "weak legged" ; )

You'll be doing a bit of hiking here and when I say "a bit" I mean a few hours minimum and a good bit uphill, so be prepared!

At Hartmannswillerkopf (or Vieil Armand) there is a pretty good view of Alsace and the surrounding area.

The French set themselves up at Hartmannswillerkopf so that they could keep track of what the Germans were up to.

Of course so did the Germans.

Remember that Alsace at the time was part of Germany so the Vosges mountain range was the France-Germany border then.

And the Germans wanted to see what the French were up to as well so.

For most of 1915 the French and the Germans attempted to take over the mountain.

And they both succeeded.

And this continued throughout 1915.

January 8, 1916 was the last major attempt to take the summit of Hartmannswillerkopf.

After that, the battle front in Alsace didn't move much.

Both sides continued to attack the other side but only with grenades, shells, and machine guns...

There were no more men charging into no man's land for the next three years which did a lot to keep down the death tolls.

Of course thousands of men died here, although a lot less than certain unverifiable sources say.

This is one of the few WW1 memorials in the mountains, so wear your hiking shoes and wear clothing that will cover your legs.

Especially in the summer...

They do cut back some of the plants growing naturally around the trenches but it just grows back.

It's not particularly fun to visit after a lot of rain either. Those trenches were really muddy during the war and they still are when it rains!

There's not much choice for food and drink up there.