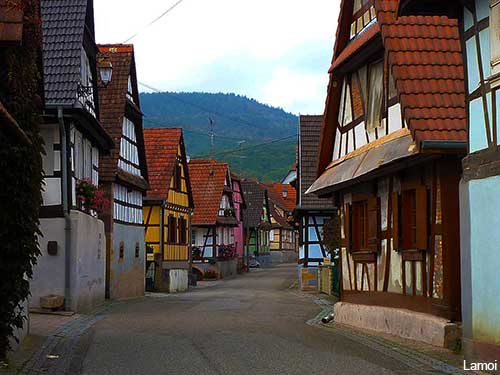 Cleebourg France is one of the northern wine road villages in Alsace.

The Wine Road in Alsace for the most part is one long crooked line of villages from Marlenheim in the north to Thann in the south...

But there is another part of the Alsatian wine road just outside of Wissembourg.

It is the largest of these villages (but Riedseltz has a train station). The others are Rott, Steinseltz and Oberhoffen.

Hopefully you'll find everything that you need to know about this tiny village or Alsace...

Cleebourg France is part of the Alsatian wine road...

But it's actually located very close to the northern Alsace border, so it's a great place to stay if you're interested in wine and northern Alsace (lots of castles, mountain views, military history and Alsatian culture very nearby).

If you want to get away from the crowds (and off the beaten tourist path), it is a good choice for a peaceful and quiet Alsace vacation.

All distances given are the approximate distance from the center of Cleebourg France.

Wissembourg is a charming small town on the northern Alsace border. It's just as charming and beautiful as the more famous villages on the wine road. In fact, there are a few wine road villages very close by if you're interested!

Where to Stay in Cleebourg France

The Hotel au Tilleul is a simple little hotel like many others that you'll find in Alsace. Family owned and run, offering clean simple rooms in a charming little wine village. This is the real deal. Non touristy village and a non touristy hotel for those of you looking to try something a little different.