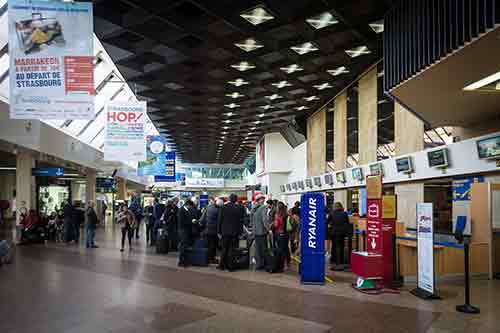 If you're looking at Strasbourg flights, it's perfectly normal because you probably think that the Strasbourg Entzheim airport is the largest airport in Alsace...

So flights to Strasbourg are likely to cost you more than flying into other airports. But if convenience is more important than price, it could be the way to go for you.

And if you're planning on staying in Strasbourg or northern Alsace, it will be very convenient for you.

But if you're planning on spending most of your time outside of Strasbourg...

Such as closer to the center of Alsace along the wine road and its more famous villages, you won't get any extra benefit out of flying into Strasbourg.

To give you an idea of how big (or more accurately how small) the region of Alsace is...

You can drive from Wissembourg (the very top) to Basel, Switzerland (near the very bottom) in about 3 to 4 hours...

And that's mostly on highways.

So flying to Strasbourg will not make any huge changes in your travel times because Alsace is a very small region.

How to Get to and from Your Strasbourg Flight

The Strasbourg airport has a train station at the airport!

Well, it's less than a ten minute walk from the airport. You can catch the train  about 3 to 4 times an hour during the week Monday through Friday and about 2 to 3 times per hour on Saturdays. It varies.

They generally run between the hours of 6am and 10pm. The hours on the weekends and holidays are shorter than during the week as you would expect in France.

It's only about 9-15 minutes to the train station in Strasbourg.

There are quite a few hotels in Strasbourg that are easily reachable from the main train station and you can usually take one of the trams a short distance to many other hotels and accommodations.

Taxis are generally available from 6am to 11pm or as long as there are flights arriving.

So if you somehow manage to arrive after the last train has left, you'll very likely still be able to get a taxi or your hotel if you prefer.

Looking for Airline Tickets to France