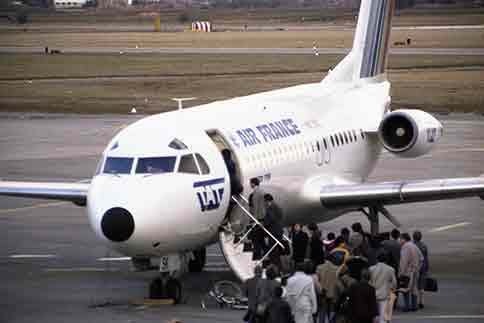 For most of you, the Charles de Gaulle airport in Paris France will be your airport destination if you decide to fly to Paris.

It's a very good choice because you'll likely find some lower priced airfare flying into a large international airport than a smaller regional one.

And it doesn't matter if you are planning to make a stop in Paris or not...

Clearly it's a good move if you want to spend a few days in Paris, but you can just as easily fly into Paris and hop on the TGV to Strasbourg or Basel without leaving the airport.

I think it's fair to say that I've spent a lot of time at the Charles de Gaulle airport in Paris France.

It's usually the airport where I make my connection to the US when visiting my family back home.

CDG is a really big airport and it's not as wonderfully organized as some of the major hub airports in the US for sure.

But at the same time I've always managed to find my way through Terminal 2 without asking for directions (and you will most likely spend some time in Terminal 2 if you are on your way to Alsace by plane).

There are signs everywhere and there are plenty of opportunities to ask for information or directions (in English) if you feel the need to.

Getting around in the Charles de Gaulle Airport

The internal shuttle bus system in the Charles de Gaulle airport in Paris France is CDGVAL. It will take you to Terminal 1, 2 or 3 as well as to parking areas.

Terminals 1 and 2 are the largest of the 3 terminals at CDG. Terminal 2 is where you will find the national French train systems (SNCF), the TGV train station and the local RER B train to Paris.

Terminal 2 is also where you will likely find your departure gate for the Strasbourg airport and the Basel Mulhouse Euroairport (usually terminal 2G).

Generally when you arrive from a long distance international destination, there will be quite a few people standing in strategic locations answering questions and directing traffic...

They are very quick, efficient and speak English.

And they will make sure you get on the right shuttle...and more importantly that you DON'T get on the wrong shuttle ; )

Terminal 2 has its own shuttle bus (the N1) that will take you from one end of the terminal to the other end.

The N1 shuttle will not take you to 2G. To get to Terminal 2G, you will need to take the N2 shuttle bus (at the same place that you would wait for the N1 bus, so pay attention to which bus it is.

Keep in mind that you can walk from one end of Terminal 2 to the other in about 15 to 20 minutes.

But you'll still have to take the shuttle bus to Terminal 2G. Fortunately it's only about a 10 minute ride.

How to Get to Paris from the Charles de Gaulle Airport

There are quite a few ways to get to the center of Paris from the Charles de Gaulle airport in Paris France (which is technically in Roissy not Paris).

Most of them are inexpensive (between 10€ and 20€ per person) and require about an hour of your time.

They even run relatively regularly (between 6am and 10pm).

But they will have fixed drop off points so you'll need to be ready to carry your bags possibly up or down some stairs and along the streets of Paris.

More convenient options are taking a taxi (which will run you approximately three to six times the cost of public transportation) or arranging for a mini shuttle for small groups.

Going to Paris by Train

From the Charles de Gaulle airport in Paris France to Gare du Nord is about 30 minutes.

It makes quite a few stops. Certain trains will make more stops than others. Here are the main ones...

Taking the Bus to Paris

The Roissybus can take you from CDG to Paris-Opera and back. You can catch this bus at all 3 terminals from 6am to 11pm.

The Roissybus takes about 1 hour in each direction.

You will need a minimum of 1 hour (and likely much more because there are many stops).

You might have noticed that all of the other public transportation available stops running from around 12am to 6am. So what are you going to do if you find yourself at the Charles de Gaulle airport in Paris France between the hours of 12am and 6am?

Catch one of the night buses to Paris!

They run from around 12am to 4:30am. Their ultimate destination is Paris-Gare de l'Est. They run about every half hour or hour depending on which one it is.

The trip to Paris will take between 1 hour and 1 and a half hour.

Taking a Shuttle Bus to Paris

Cars Air France can take you from CDG to:

You can expect somewhere between 45 minutes and 1 hour either from CDG to Paris or Paris to CDG. Buses leave every 30 minutes from around 6am to 10pm to 11pm.

From CDG you can take this bus at a number of different gates in Terminals 1 and 2.

You can buy tickets from the bus drivers, in the airport or from Air France.

Taking a Taxi or Private car to Paris

The main advantage of taking a taxi or private car to Paris is being dropped off directly in front of your hotel or wherever you are staying.

And you will pay a good bit more for that convenience.

Rates will vary depending on the amount of traffic and time of day. It could be 30 minutes or more than an hour. Day time rates are different than evening rates.

Going from the CDG Airport to Other French Regions

Driving a Car from the Charles de Gaulle Airport

Not that you're likely to rent a car at the Charles de Gaulle airport in Paris France, but if you are, you'll find the car rental service counters in Terminal 1 and 2.

Unless you have a very good reason, I don't really recommend that you rent a car at the Charles de Gaulle airport in Paris France.

If you're on your way to Alsace (as I hope you are), there will be opportunities to rent a car in Strasbourg, Colmar or the Basel Mulhouse airport.

Going to the Airport Train and TGV Station Directly

You can catch a train at the SNCF train station in Terminal 2 at CDG to anywhere in Europe with a train connection to the national French train system.

Check out train tickets prices and book a train here

If you think you'll do a lot of train travel on your trip, you can check out rail pass prices here

And go from the Paris airport to any TGV train destinations (examples of some of these destinations are listed below)...

Looking for Airline Tickets to France