The Train Museum in Mulhouse 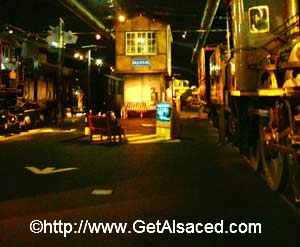 First off, the train museum in Mulhouse is huge!

I couldn't really keep track of how many trains there were.

That's how many trains there were!

The first part of the museum is a very large room with something like 30 trains in it organized according to historical significance.

So it's really about train history.

As you walk into the room, you can grab a little machine that will give you a tour of this part of the museum in either English or German.

**As you can see in the photo, it's not easy to take photos in the first part of the museum.

The lighting looks really great when you are inside the museum, but not in your photos...

How the Audio Tour Guide Machines Work in the Train Museum in Mulhouse:

But the instructions that the little machine gives you aren't entirely clear. 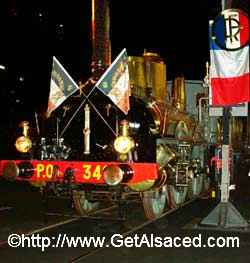 At least I didn't find them to be clear enough.

Also, this particular room in the train museum in Mulhouse is not well lit, so bring your strongest flash.

It adds to the atmosphere of the museum, but it added nothing nice to my photos.

Then there is a second huge room with good lighting for taking photos, but the really unusual trains are mostly in the first room.

But there are A LOT of trains here.

What You Will Find in the Second Room at the Mulhouse Train Museum:

Our Conclusion on the Mulhouse Train Museum

The train museum in Mulhouse itself is impressive.

And you'll learn a lot about trains and train travel in Europe. 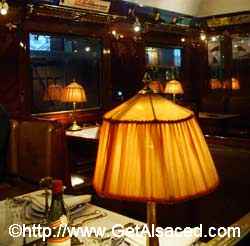 There are a lot of things I know I never thought about, particularly regarding the use of trains during World War One and World War Two.

Our pre-teen daughter didn't like it that much, but then would any pre-teen girl like a train museum?

I kind of doubt it.

Our 7 year old daughter found it interesting, but I don't expect either one will be begging to go back.

I think the younger the children are, the more they will like it.

Our own 7 year old liked climbing around the trains and looking at things too.

I suspect that boys would like the train museum in Mulhouse more than girls, particularly if they are big fans of Thomas the Train Engine.

How to Get to the Cité du Train in Mulhouse?

Here's a map of how to get to the train museum.

It also has the train museum schedule and other useful information...

If you've got a map and you follow the signs to the "Cité du Train" you should be able to find it pretty easily.

And in my opinion...

A GPS is worth its weight in gold!