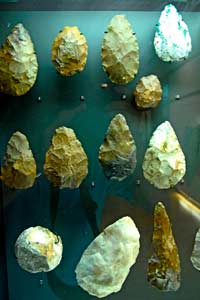 We know humans were in prehistoric Alsace at least 600,000 years ago.

And in Alsace, the Stone Age (or Paleolithic Age) meant the Ice Age.

Well, actually they were Ice Ages.

There would be an Ice Age and then it would warm up a little and then another Ice Age, and so on and so on.

It's during this period that they would discover fire, but first they started making tools out of wood, stone, and bone.

In prehistoric Alsace, they hunted big animals capable of surviving in really cold weather like Woolly Mammoths and the ancestors of modern Reindeer.

They looked for warm and safe places to live like caves.

They didn't build their own homes.

Mainly because they moved around all the time hunting and searching for food.

Usually there were anywhere from 20 to 50 people living together in a group of a few families.

They found 600,000 year-old stone tools in Aachenheim (not far from Strasbourg). And those are the oldest tools ever found anywhere in eastern France.

You can see all these prehistoric things at the museums in Strasbourg, by the way.

After a few million years...

Of course, it helped that the last Ice Age was ending.

Prehistoric Alsace was one of the first regions to "experience the Neolithic Revolution" in France (which really means, they learned to farm, stopped moving around all the time, and started building houses). 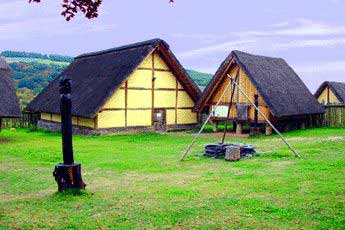 This was also the first time that there was only one species of human.

Before that, there were Neanderthals, Homo Erectus, and Homo Sapiens to name just a few.

So now, they were farming and building permanent homes (sometimes in groups of 10 or more buildings).

They also started burying their dead not too far from these little villages.

And they found things from as far away as the Mediterranean and Atlantic ocean areas in some of these little cemeteries in prehistoric Alsace (that's a 10+ hour drive in a car nowadays). 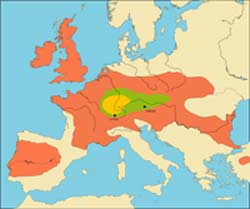 The ancestors of the Celts started to appear in Alsace during the Bronze Age (around the 7th century BC).

The region of Alsace-Lorraine is considered by some to be the birthplace of the Celts (around 1500 BC).

They formed tribes (all over Europe, not just in Alsace).

Each tribe had a chieftain. These tribes weren't organized into larger groups.

They each had their own plans separate from all the other tribes.

There is evidence all over Alsace that they built large long houses with walls made of tree branches and roofs made of thatch where most likely a group of families lived.

A Celtic village would have been basically a group of these sort of buildings.

Other than that they have found graves with personal belongings

Including jewelry, weapons, and tools.

The Celts in Alsace made beautiful metal tools, weapons, and jewelry.

Some of their tool designs haven't changed much even in modern times... 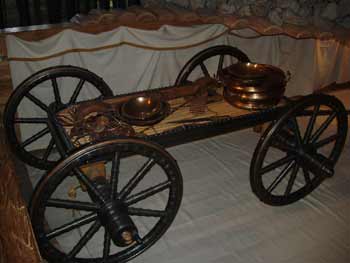 They found things from Greece and the Etruscan civilization (an ancient culture that existed before the Romans in modern-day Tuscany) buried in Celtic graves.

So we know that they were in contact with other civilizations...

Even if it was only for trade.

Rome took over Alsace...and the rest of France, Holland, Switzerland, Belgium, and parts of Germany...

There's not much left of Celtic culture in Alsace.

But there are a few sites associated with the Celts to see (Le Donon and Mont Saint Odile's pagan wall).

Nobody is really sure what the purpose of the Pagan Wall was or who actually built it.

Le Donon, on the other hand, is thought to be a sacred area of worship for the Celts and then later for the Romans too.