Looking for a Hotel in Blienschwiller Alsace? 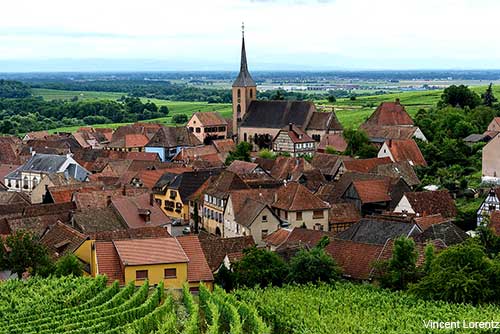 If you're looking to stay in a hotel owned by a wine maker where you'll have a chance to tour their facilities, then consider a hotel in Blienschwiller...

And this adorable village may be tiny, but you'll find 30 wine makers here, so get ready to taste some wine!

You could even work up a thirst before you go off wine tasting. You'll find plenty of opportunities to walk through the vineyards or go for a bike ride.

Staying in a hotel in Blienschwiller means you'll have a chance to try a lot of wine without ever leaving the village of 30 wine makers...

But when you're ready to venture out of town, you'll find a number of wine villages just a few miles away if you would prefer to make some short hikes or bike rides.

And you'll definitely need a car when you stay in a hotel in Blienschwiller because there is no train stop here, but you could take the train to Dambach la Ville (only 2 miles away) and hike or bike over.

Distances given are the approximate distances from the center of Blienschwiller.

Looking for a Hotel in Blienschwiller?

Here's a cute little discount hotel in Blienschwiller on the wine road in Alsace run by a wine maker's family. Clean, simple rooms for a reasonable price in a pretty little village. Parking, breakfast and WiFi available. Bike storage and a few bikes available for rent.