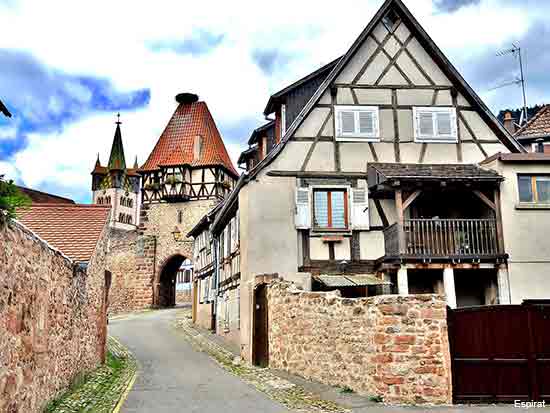 Because the two villages have formed a sort of partnership (not to mention that they are less than 2 miles away from each other) although they are separate villages.

That's a half an hour walk if you're planning on taking the train to Scherwiller.

It is a beautiful but quiet little village unless you happen to show up for one of their festivals (and there are quite a few from May until December for such a small village).

And between the two villages, you'll find 15 wine makers to try out plus 10 restaurants so it may be a small village but you could easily spend the day here wine tasting, hiking and eating great food!

If you choose to stay in Chatenois, you'll have your peace and quiet, but you'll still be very near some very well known and popular attractions in Alsace.

It doesn't have a train stop, but it is a part of the regional Alsace train system and there is a shuttle that will take you from the Selestat train station to Chatenois.

It is in coordination with the train schedule and there are shuttles running every hour from morning until evening.

And Selestat is not far away at all which is a good thing if you're planning on using the train and bus systems in Alsace because the Selestat train station is where you can catch the shuttle to Haut Koenigsbourg, Volerie des Aigles, Montagne des Singes and Cigoland.

Distances given are the approximate distances from the center of Chatenois.

Where to Stay in Chatenois

If you love hotels with a lot of Alsatian charm and decor, you'll love the Hotel Dontenville. It's a cute little two star hotel with only 13 rooms, but with a lot of character for a reasonable price. The hotel restaurant is also good. Breakfast, WiFi and parking available.